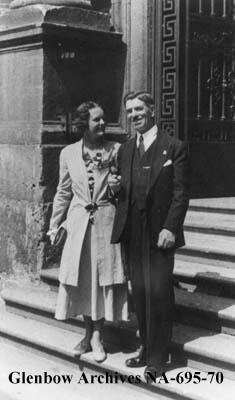 George William Pocaterra, 1882-1972, was born in Italy, the son of an aristocratic family. In 1903 he came to Canada and worked in Winnipeg, and as a cowboy on the Bar D Ranch near High River, Alberta before he established the Buffalo Head Ranch on the Highwood River in 1905. There he developed a close relationship with the Stoneys, and explored and mapped much of the Kananaskis area. In 1924 he turned the Buffalo Head into a successful dude (guest) ranch. When his father died in 1933 he sold the ranch and returned to Italy to settle family affairs. There, in 1934, he met Norma Piper, who was studying opera singing in Milan.

Norma, 1898-1983, was born in Leamington, Ontario. Her family moved to Calgary in 1918 where her father, Dr. W.A. Piper, practiced as a dentist. Norma made her Canadian debut as a coloratura soprano in 1930 and left for Italy in 1934 to further her musical career. George and Norma married in 1936, and George managed his wife's rising operatic career until it was cut short by Second World War. They returned to North America and in 1941 settled on the Ghost River. Norma became a voice instructor at Mount Royal College in 1942, and taught singing in Calgary until the 1970s. The Pocaterras moved to Calgary in 1955.

The material is predominantly in English, but some of the correspondence from George to Norma is in Italian.

There is an interview with Norma in the Sierra Club of Western Canada Oral History Project at Glenbow (RCT-618-43).

AR 19 are four painted portraits. They have not been included in the extent or description.