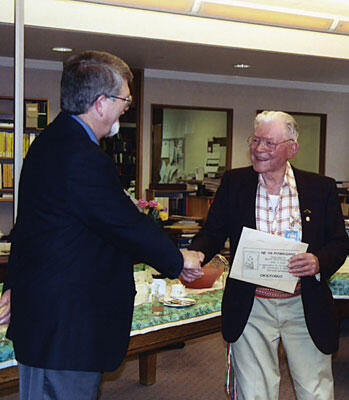 R. Geoffrey Burtonshaw, 1916-2012, was born on a farm near Valpoy, Manitoba. He finished grade eight. He married Grace K. Paradis in Dauphin, Manitoba in 1940. They had four daughters Janice, Beverly, Lois and Valerie. He worked in farming and construction until 1941 when he joined the RCAF in Winnipeg. He was engaged in technical work, spending most of his time at #3 Bomb and Gunnery School at Portage La Prairie. He became a reservist in 1946. Upon leaving the Air Force he began work as a carpenter and moved to Calgary, Alberta in 1952 with his family. He worked as a carpenter for a number of employers, among them Bennett and White Construction. He retired in 1981. He subsequently became interested in Metis genealogy and collected a vast amount of information on the subject and made numerous personal contacts in the field. In the spring of 1991 he started "The Metis Newsletter", a bi-monthly publication. He also assembles a Metis Researcher contact list and hosts Metis Research Nights at his house. At present he answers up to 700 written enquiries a year on Metis genealogy. He also volunteers on a regular basis at the Glenbow Archives, assisting Metis genealogy researchers.

The collection consists of photocopies of Metis genealogical research material collected by Burtonshaw from such sources as Library and Archives Canada, various libraries and churches, and personal contacts. Includes a complete run of "The Metis Newsletter" as well as Metis Researcher lists compiled by Burtonshaw. Burtonshaw's personal memoirs "I Remember" are included. Also includes photographs of Manitoba and Geoff's hometown of Valpoy, Barkerville and the Cariboo country of British Columbia, Fort Simpson, Hay River, Nahanni, Batoche, the Fidler family reunion, etc.

The Glenbow Library houses many of Burtonshaw's books related to Metis genealogy.