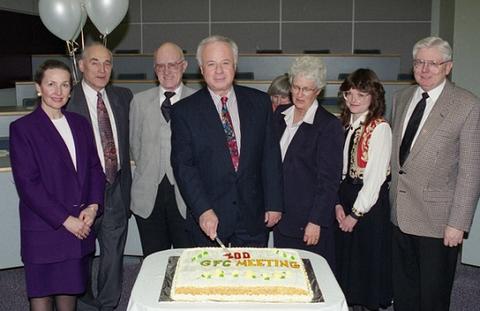 29.73 m of textual records and other material:

The GFC is faculty-dominated and provides institutional leadership on the issues of institutional policy and priorities, and has responsibility for the academic affairs of the University. Areas of responsibility include: courses of study; time-tabling; appointment of examiners; examinations; conferring of degrees; University Calendar; Library; establishment of faculties, schools, departments, chairs, and courses of study; academic awards; and admission standards. The GFC makes recommendations to the Board of Governors with respect to affiliation of other institutions; academic planning; campus planning; building program; budget; regulation of residences and dining halls; and procedures with respect to appointments, promotions, tenure anddismissal.
The President connects the two governing bodies, as Chair of GFC and as a voting member of the Board. Recommendations from GFC to the Board are transmitted through the President.

GFC consists of 113 voting members who meet eight times per year to perform their duties, according to the Post-Secondary Learning Act (2004) and the needs of the university. The 113 voting members comprise: the President, as Chair; the Provost and Vice-President (Academic), as Vice-Chair; members by virtue of office, including the Deans, Vice-Presidents, Registrar, and Directors of Information Resources and Continuing Education; members elected from Faculties; student members; appointed members.

The standing committees of the GFC are: GFC Executive Committee, Academic Planning and Priorities Committee, Research and Scholarship Committee, Student Academic Appeals Committee, and Teaching and Learning Committee. The President is an ex officio member of all GFC Standing Committees.

Fonds is arranged into series according to committee, or subject matter.

Administrative records of The University of Calgary are restricted for a period of 15 years. All records must be screened for personal information.

Minutes of the GFC are unrestricted. GFC Executive minutes go to the GFC for approval and are therefore also in the public domain and unrestricted.

This fonds is a vital record of the University.

Prior to 2012, the minutes of the Academic Program Committee (APC), University Planning Committee (UPC), and Research Development and Policy Committee (RDPC) were managed by the office of the Chair (Provost and Vice-President Academic), Vice-President Research etc. The minutes for these committees ca. 2006-2012 were received in electronic form. Contact uarc@ucalgary.ca for access.

Post 2012, the University Secretariat manages the creation of all agenda packages.