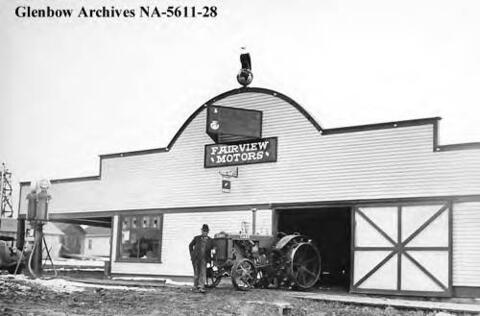 Frederick Naab, 1887-1975, was born in Evansville, Indiana, USA. Between 1906 and 1911 he worked in Evansville as an erecting machinist and traction engine operator with Heilman Machine Works. By 1914 he was employed by J.I. Case Threshing Machine Co. as a salesman, working at first out of Saskatchewan and then Peace River, Alberta. In 1940 he opened a farm implement dealership in Tisdale, Saskatchewan. In 1953 he married Flora Alice Hollopeter Minor, 1895-1972, who had four children: Perry A., Edna May (Smith), Lillian (Clark) and Ruth (Moodie).

Between 1953 and 1955 the Naabs relocated to Medicine Hat where they operated Medicine Hat Distributors, a local distributor for Cominco Elephant Brand fertilizers. Due to an earlier crippling accident, Frederick was forced to sell Tisdale Farm Equipment to Thomas E. Worman in 1958. Throughout his life, Frederick retained close ties with his hometown, family church and the Evansville Masonic Lodge.