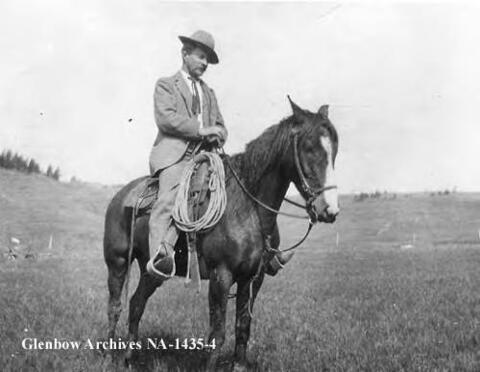 Frederick Alfred Burton, 1868-1951, came to Fort Macleod, Alberta from Guelph, Ontario in 1886. He worked on many different ranches and in 1889 registered his own cattle brand. In 1896 he began his own ranch at Trout Creek in the Porcupine Hills, west of Claresholm, Alberta. He also established the Furman post office at his home. In 1896 he married Minnie Furman and they had five sons, Frederick Charles, Edward Dewey, Alfred Marion "Toots", John Furman "Pat", and Gordon Lloyd. Gordon, 1916-1990, grew up in Claresholm and attended the University of Alberta and Iowa State University, USA where he received his PhD in 1946. Between 1946 and 1951 he taught at the University of Saskatchewan and then at McGill University. He returned to Claresholm to operate the family cattle ranch after his father's death. He was an authority in agricultural economics and served on many related boards and government committees including the Canadian Agricultural Economics Society, Western Stock Growers' Association and the Alberta Public Expenditures and Revenue Committee. He was a director of Burns Foods for many years, was a founding member of the Canada West Foundation, and sat on the Federal Meat Import Advisory Board. He ran unsuccessfully as a Liberal candidate for the Macleod constituency in the 1957 federal election. He was inducted into the Alberta Agriculture Hall of Fame in 1977. He and his wife, Catherine Jean Stafford, 1919- , had four sons, John Charles, Jay Franklin, Richard Gordon and Randall James. The family ranch was incorporated in 1980 as Burke Creek Ranch Ltd. and is operated by Jay and Richard.

The originals are held by Catherine Jean Burton.