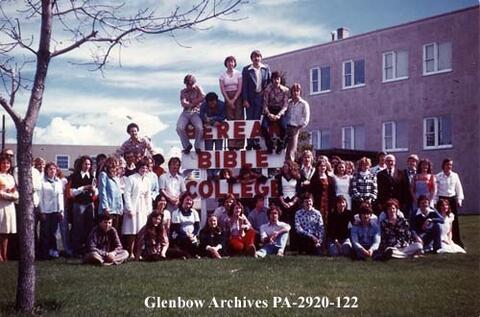 Foothills Christian College in Calgary, Alberta was established by Cyril Hutchinson in 1948 as Berean Bible College. Hutchinson had trained with William Aberhart at the Calgary Prophetic Bible Institute beginning in 1925, and had served as the Principal of CPBI Bible School from 1935 until 1948, when he left to set Berean. The College was incorporated under the Religious Societies Act in 1949, and classes were first held in the Christian and Missionary Alliance Church until the new campus, located at 3216 - 4th Street NW) was completed in late 1949.

Hutchinson served as Principal from 1948 to 1969, and as President from 1969 until his death in 1980. He was also a radio evangelist, and under his direction the College broadcast a weekly radio program called The Family Bible Hour (originally called The Family Goes to Church) from 1948 to the 1980s. The College's name was changed to Foothills Christian College in 1983, and the 4th Street campus was sold. It then leased space until it closed in 1986.

The recordings were originally numbered RCT-707, but they are now stored with the manuscript material at M-7481.