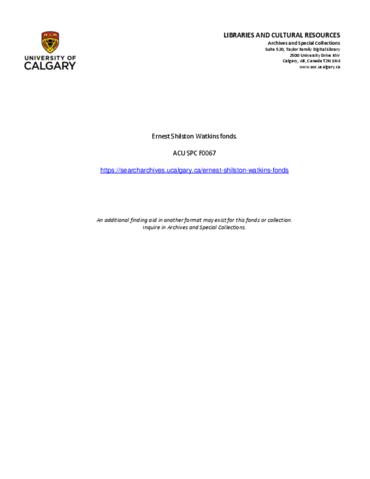 6.4 m of textual records and other materials.

Lawyer, politician and author Ernest Shilston Watkins was born in Liverpool, England, on June 18, 1902. Graduated in 1922 from the University of Liverpool with an LL.B. (Honours). Joined Law Society of London in 1923; practised law until 1939. Member of the Stepney Borough Council, 1932-1935, and member of the Council of the University Settlement Association, 1930-1938. Both assistant editor and legal correspondent for The Economist and news commentator for the British Broadcasting Corporation, 1945-1954. Emigrated to Canada in 1954 and continued his legal and political associations, being a member of the Law Society of Alberta and the Alberta Crimes Compensation Board. Progressive Conservative Member of the Alberta Legislative Assembly, 1957-1963. Publications include No depression in Iceland (1942), According to plan (1945), Blessed plot (1946), Cautious Revolution (1950), Prospect of Canada (1954) and R.B. Bennett (1963). Died in 1982.