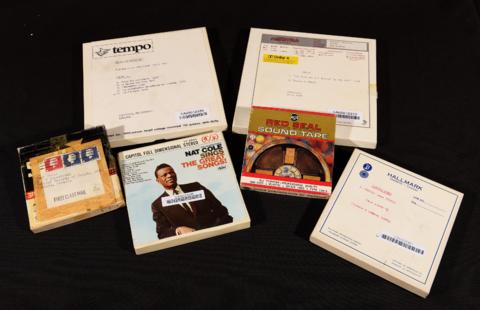 54.87 linear meters of textual records and other material:

EMI Music Canada, formerly one of the major record labels in the Canadian music industry, had its beginnings in Capitol Records of Canada Ltd., a subsidiary of the Capitol Records company started by Glenn Wallichs, Buddy DeSylva, and Johnny Mercer in Los Angeles in 1942. Capitol Records of Canada was formed in London, Ont., in 1949 by Ken Kerr, Johnny Downs, and Lockwood Miller. A friend of Wallichs’s from their school days, Miller acquired a five-year contract to distribute Capitol Records recordings in Canada. By 1954, however, the U.S. office of Capitol Records decided to let the London group’s contract expire and instead established its own label, Capitol Records Distributors of Canada Ltd., to distribute its recordings directly to the growing Canadian market. The new company was headed by Harold J. Smith and based out of Toronto rather than London. The following year Capitol Records was acquired by Electric and Musical Industries Ltd. (EMI), a British company formed in 1931 through the merger of Columbia Graphophone and the Gramaphone Company. In 1956 the Toronto office of Capital Records moved to a new location at 635 Queen Street East and two years later the company officially changed its name back to Capitol Records of Canada Ltd. after Miller’s formal rights to the name expired in 1958. EMI brought distribution of the classical label Angel Records and the France-based Pathé Records to Capitol Canada in 1959, and, later, several of the popular British Invasion bands of the mid-1960s, including The Beatles, Cliff Richard, The Dave Clark Five, The Yardbirds, and Gerry and the Pacemakers.

Capitol Canada began to expand its operations across Canada in the 1960s, opening branch offices in Montreal, Calgary, and Vancouver. From 1962 to 1968 Geoffrey Racine served as label president and from 1964 to 1978 Paul White directed the A&R department. In 1960 the A&R department started a domestic division, the first of any major label operating in Canada. Within four years its director, White, was responsible for signing a range of popular Canadian artists in the pop, rock, country, and folk fields. The main domestic acts released on Capitol Canada in this period included The Esquires, Jack London and the Sparrows, The Staccatos (Five Man Electrical Band), Robbie Lane and the Disciples, The Sugar Shoppe, Diane Leigh, Malka and Joso, Wes Dakus, Barry Allen, and Gary Buck. Deals followed with the successful domestic independent labels Roman, Hawk, Yorkville, and Yorktown, which brought the label distribution of popular Toronto rock acts Ronnie Hawkins, David Clayton-Thomas, and the Ugly Ducklings. The label’s first all-Canadian recording appeared in 1961, a recording by the house band at the Granite Club in Toronto, Frank Bogart and His Society Dance Orchestra, entitled Society Dance Date…, which was released on the Capitol 6000 series of Canada-only LPs that White introduced to target the budding Canadian market. The immense success of the Beatles in the mid-1960s was a major factor in the growth of the label and its command in this period of over forty percent of the market share. Capitol soon became the country’s largest supplier of Canadian recording artists. A French A&R division opened in Montreal in 1966 and went on later to sign the Quebec artists Pierre Lalonde, Les Cailloux, Beau Dommage, Raôul Duguay, Suzanne Stevens, Morse Code, and Maneige. In 1967 Edward Leetham was appointed company president, the first Canadian-born executive to hold the position, and a new head office and distribution facility was opened at 3109 American Drive, in Mississauga, Ont., which remained the label’s headquarters for the next forty years. When the new headquarters opened in 1967 the company had over 150 employees.

Arnold Gosewich became president of the label in 1970. He introduced a new marketing campaign that year promoting Capitol Canada’s strong domestic roster under the brand “Sounds Canadian”. Canadian artists signed to the label in the previous two years featured prominently in the campaign. Particularly successful for Capitol Canada at the time were releases from their rising stars Anne Murray and Edward Bear. At the Junos in 1971 and 1973 Capitol Canada was awarded Top Canadian Content Record Company, and Gosewich was named Industry Man of the Year in 1973. In 1974 the label changed its name to Capitol Records–EMI of Canada Ltd to more clearly reflect its connection with the EMI label. Two years later, the label opened its own vinyl record pressing plant adjacent to the American Drive head office in Mississauga, where it manufactured all records released by Capitol-EMI plus other independent labels affiliated with the company, including Daffodil and Arista. From 1976 to 1985 the Canadian A&R department was integrated with A&R at Capitol U.S. to bring artists greater exposure across the borders of Canada and the United States.

Dave Evans served as Capitol–EMI Canada president from 1977 to 1986 followed by Richard Lyttelton from 1986 to 1988. Deane Cameron took over from White as head of the Canadian A&R division in 1978. Cameron soon brought in deals with domestic independent labels Anthem and Aquarius, which led to distribution of some of the main Canadian musical icons of the 1980s, including Max Webster, April Wine, Rush, and Corey Hart. Among the roster of artists Cameron signed as head of A&R in the late 1970s and the 1980s were Tom Cochrane and Red Rider, Luba, Rock and Hyde, Slik Toxic, Helix, Glass Tiger, Streetheart, Prism, Long John Baldry, and David Wilcox. In 1982 Dan Middleton and the engineering arm of the company introduced Super Dynamic Range (SDR) in all of the cassettes manufactured by the label. Recognizing the superior sound quality produced by SDR, it was later adopted by Capitol U.S. under the name XDR. The first CDs were also released by Capitol–EMI Canada beginning in 1984. Glass Tiger’s The Thin Red Line was the first Capitol–EMI CD by a Canadian artist, released two years later in 1986.

Cameron’s eight years as head of A&R were followed by his appointment as president of the company in 1988. His support for the domestic music industry continued throughout the late 1980s and the 1990s by signing a wide range of Canadian artists and forming deals with the independent labels Alert and Nettwerk, which carried Holly Cole and Sarah McLachlan respectively. Among the many notable artists signed in this period were The Tea Party, Moist, The Rankin Family, Rita MacNeil, Kim Stockwood, John McDermott, Stompin’ Tom Connors, Susan Aglukark, Tom Cochrane, I Mother Earth, and Econoline Crush. Tim Trombley took over from Cameron as head of A&R in 1988 and continued to develop and manage the label’s extensive domestic roster until 2006. In 1990, 1991, and 1994, Cameron was named executive of the year at the Canadian Music Industry Awards. Virgin Records was purchased by EMI in 1992 and was brought to Capitol–EMI Canada as an independent division within the company. Following the acquisition, Virgin Records Canada continued to maintain its own head office in Toronto with a separate A&R department. In 1993 the company’s name again changed and Capitol Records–EMI of Canada became EMI Music Canada. A CD production plant was opened by the label in 1995 and the following year EMI’s annual general meeting was held in Toronto, marking the first time it was held outside of England.

In the 2000s EMI Music Canada’s support of Canadian talent continued with successful releases by k-os, Serena Ryder, Nickleback, and Johnny Reid. The company also formed a distribution deal with the independent Arts & Crafts label and began releasing its popular acts Feist, Broken Social Scene, and Stars. Cameron’s over twenty years as president of EMI Canada and his long support for the Canadian music industry were recognized in 2010 when he was named to the Order of Canada and in 2011 when he was awarded the Walt Grealis Special Achievement Award at the Junos. EMI Music Canada ceased its operations after it was acquired by the Universal Music Group in September 2012.

EMI Music Canada and its predecessor bodies had a continuous recordkeeping system. The records were transferred directly from the donor.

The fonds consists of records documenting the history, administration, and activities of EMI Music Canada and its predecessor labels, Capitol Records–EMI of Canada, Capitol Records of Canada, and Capitol Records Distributers of Canada. The records include studio master recordings, demos, photographs, memorabilia, correspondence, business reports, promotional material, press clippings, financial statements, music videos, legal agreements, presentations, and other material reflecting the activities of one of Canada’s largest record labels from approximately 1949 to 2012. It includes three series based on the EMI Music Canada recordkeeping system: President’s Office, EMI Canada 50th Anniversary, and Artist & Repertoire (A&R). The A&R series has been divided into 8 sub-series: Administration files; Audio recordings; Video recordings; Photographs; Record awards; Demo submissions; Artwork; and Commercial audio discs. The President’s Office series mainly contains subject correspondence files and artist files created and maintained by the company’s president, Deane Cameron, from approximately 1992 to 2012, along with reports, budgets, marketing plans, and presentations. These files provide insight into the executive leadership of EMI Canada over the span of Cameron’s tenure, documenting the range of artists supported by EMI Canada as well as some of the developments in the wider Canadian music industry over the 1990s and 2000s. The files contained in the 50th Anniversary series document the company’s history from 1949 to 1999, and includes photographs, memorabilia, posters, pamphlets, catalogues, LPs, and 45s reflecting celebrations held in 1999 and research that led into the production of a commemorative book and CD box set entitled, Fifty Years of Music: The Story of EMI Music Canada. The administration files in the A&R series primarily consist of artist files and general files. The artist files document the artistic development and recording careers of a wide range of artists signed to EMI Canada and its affiliate labels. The general A&R administration files span a variety of activities in the operation of the department, primarily however documenting business relations with EMI international branches, attendance at music conferences, seeking new talent, commercial releases and catalog listings, and demo assessments. The audio recordings include both released and unreleased material and a wide range of EMI Canada artists’ original studio masters, demos, outtakes, alternate mixes, remixes, instrumentals, live recordings, and production masters. The video recordings are largely edited masters and promo versions of music videos as well as promo clips and live performances by artists on the EMI Canada label as well as Canadian and international artists distributed by the label. There are over 20,000 photographs of EMI Music Canada artists taken by professional photographers for use as album artwork, publicity stills, and promotion. The A&R artwork consists of over 11,000 graphic items used in the creation of album art for EMI Music Canada and related labels. Also included are 672 gold and platinum record awards received by EMI Music Canada.

All other files are open.

Includes archival material selected from accessions 2015.013, 2016.28, and 2018.17.
A selection of digitized material from this fonds is available here: http://contentdm.ucalgary.ca/cdm/landingpage/collection/emi