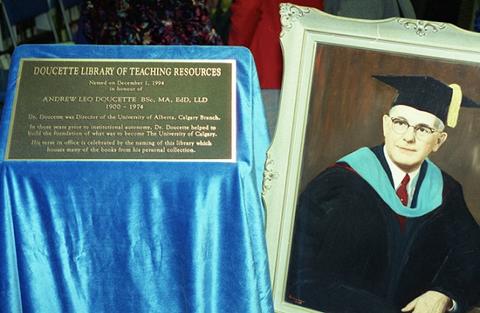 The Doucette Library of Teaching Resources is the successor to a long series of libraries that have supported the preparation of teachers in Calgary for over 100 years. In 1906, Alberta’s provincial government established a teacher training institution – the Alberta Normal School – in Calgary. By 1908, the Normal School was in its own building with a library, and in 1909 Miss Helen F. Mason was hired to run the library. In 1922, the Calgary Normal School moved into a building on the brow of the North Hill, sharing the facility with the Institute of Technology (now the Southern Alberta Institute of Technology). The institutions each occupied a different wing of the building, with the shared library located in the Centre Tower between them. The library was now run by Isabel Currie.

During World War II, the Normal School and its share of the library was temporarily relocated to King Edward School. In 1942, Isabel Currie retired and Mary Isabella (Belle) Grant took over as librarian. She oversaw the library’s move back to its former quarters at the end of the war. Grant now reported to the Chief Librarian of the University of Alberta because the Normal School had become the Calgary branch of the Faculty of Education of the University of Alberta.

By the time Grant resigned in 1957, the institution had become the University of Alberta in Calgary and the library was serving the needs of arts and science as well as education students. Her successor, Dorothy Ryder was given the mandate to build a new library on the new campus. The new library opened in 1963. Shortly thereafter, in 1964, the Faculty of Education’s Department of Curriculum and Instruction, increasingly frustrated that the promised ‘curriculum laboratory’ was not a priority for the University Library, set up its own Materials Centre and took back from the University Library some 3,000 – 4,000 school texts, children’s books, pamphlets and pictures. A large collection of 856 filmstrips was quickly added to the collection, establishing that this library would house a wide diversity of formats. Kay Snow, hired by the Faculty of Education to develop a course in School Libraries, had a significant influence on the development of what came to be known as the Ed C.I. Materials Centre.

By 1970, the Materials Centre had moved into the Education Tower, completed in 1968, and holdings numbered 20,000 books and over 8,200 AV items. In 1977, the Centre stopped being associated with only one department and became simply the Education Materials Centre. In 1980, the Centre moved to the third floor of the Education Classroom Block, into a space that allowed the whole collection to be pulled together. Automation and the cooperation of the University Library created efficiencies that compensated for declining numbers of staff.

The Centre was renamed in 1994, becoming the Doucette Library of Teaching Resources in honour of former Education Faculty member and Normal School Instructor, Dr Andrew Doucette, first Director of the Calgary Branch of the University of Alberta. The name change also reflected a changed of focus for the library, as it evolved to become less a ‘curriculum laboratory,’ and more an undergraduate library for all teacher preparation students. This evolution was accelerated and demanded by radical changes in the teacher education program, which in 1998 changed to a two-year, after-degree BEd Master of Teaching Program that was inquiry-based and field-oriented. In April 2010, the Doucette Library 'came full circle', when the Faculty of Education and Libraries and Cultural Resources signed an agreement that made the Doucette LIbrary a branch library within the University Library system.

The Doucette Library of Teaching Resources supports undergraduate teacher-preparation students through its unique collections, information services, and workshops. While the Doucette’s physical and electronic collections support the professional learning of B.Ed. students, the collection also encompasses a multitude of different resources which students can use in schools during their teaching experiences. These include: Alberta curriculum documents and authorized textbooks used in Alberta schools; an outstanding collection of children’s and young adult literature; and multimedia materials for use in schools. The Doucette also houses many years of theses and dissertations written by graduate students in the Werklund School of Education. In addition, the Doucette Historical Collection contains textbook and Alberta Education documents going back to the beginning of the twentieth century.

Fonds consists of files detailing the history and development of the Doucette Library of Teaching Resources.

Fonds has been arranged into series:
*Administrative files (1964-2012)

Administrative records of The University of Calgary are restricted for a period of fifteen years. Access requires permission from originating office. All records must be screened for personal information.