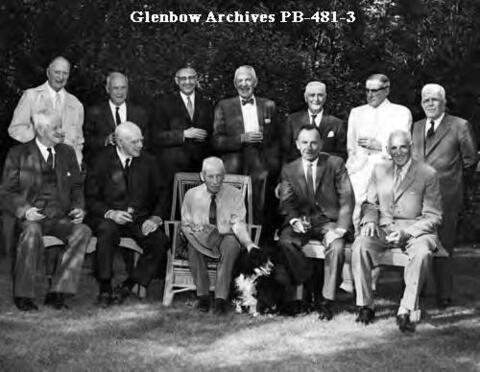 George Ballentine Coutts, 1886-1974, was born in Ontario. He received a BA in political science from the University of Toronto in 1907. In 1910 he married Alberta Bastedo, 1885-1961, who completed BA and MA degrees in modern languages at the same university. They had two children, David Bastedo Coutts and M. Katherine Coutts. They moved to Calgary in 1911 and George formed a legal publishing firm, Burroughs and Company. It was sold to Carswell Publishing in 1927, but George remained manager until his retirement in 1957. He had a life-long interest in history and was active in the Calgary Historical Society. He was a member of the Ranchmen's Club [president 1931-1933, 1937-1949], for which he wrote an anonymous history in 1953. David Coutts, 1912-1988, married Freda Grace Spooner and they had two children, Fred and Kay. He fought with the South East Asia Command, 1942-1946. He was Western Division Advertising Manager for John Deere, and was active in the Historical Society of Alberta and Alberta Archaeological Society. Katherine Coutts, 1925- , was head of physiotherapy at the Colonel Belcher Hospital before her retirement in 1990.

The George B. Coutts library is held by Special Collections at the University of Calgary.