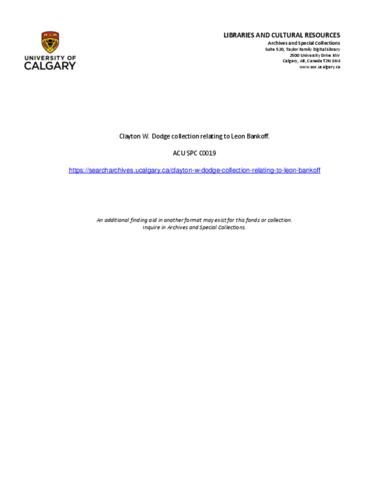 72 cm of textual records and other material.

American problemist and professor of mathematics, Clayton W. (Willard) Dodge was born in Stoneham, Massachusetts, on November 15, 1931. He grew up in Malden, attended Harvard College, and graduated from the University of Maine with a B.A. and M.A. in mathematics; he did further graduate work in mathematics at Brown University. Taught mathematics at the University of Maine for forty-one years working up from instructor to full professor. His mathematical interests include geometry, problems, teacher education and number theory. He has several papers in print, mainly on geometry and education, as well as six mathematics texts and two others used in preliminary form. In the early days of personal computers, he wrote software for several graphing and mathematical programs. His problem work started with assisting Howard Eves in the American Mathematical Monthly Elementary Problem Department; he was later a member of the editing team of that department. In 1981, Leon Bankoff turned the editorship of the Problem Department of the Pi Mu Epsilon Journal over to C.W. Dodge who continued in that position for twenty years. After retiring in 1997, he has served as Vice-Chairman of the Board of Directors of the Greater Bangor Habitat for Humanity as well as doing hands-on buiding for them. Also served as treasurer of the Board of Shaw House, a Bangor home for homeless children. He is currently Secretary of the Board of the Maine Troop Greeters.

Fonds consists of Leon Bankoff's collection of material relating to a geometric figure, the 'arbelos'. Includes correspondence, primarily with other mathematicians including Clayton W. Dodge, Howard Eves, Leo Sauvé, and Charles W. Trigg; manuscripts including notebooks; published works; works by others; and material by and about M. Victor Thébault.

Text in English and French.

Title based on contents of the collection.