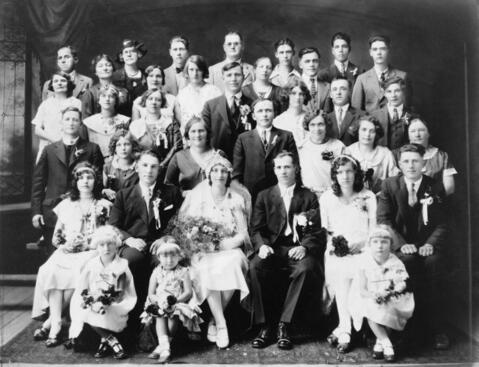 Walter Frank Chuchla, 1904-1987, was born in Blazowa, Poland, and emigrated to Edmonton in 1926. He soon moved to Coleman, Alberta where he worked as a coal miner, was secretary of the Polish Society of Brotherly Aid, and played saxophone in a Polish dance band. He married Anne Pieronek, 1915-2006, in 1931, and they had one daughter, Claire (Glowacki), 1934-2014. After a mining accident in 1945 the family moved to Calgary where Walter worked as a woodworker and later a caretaker for the Calgary Separate School Board. He retired in 1970. He was president of the Polish Alliance of Calgary (1960s), vice-president of the Calgary Canadian Citizenship Council, and was a founding member of the Canadian Polish Congress of Alberta. The Chuchlas assisted Polish refugees in the 1940s and helped organize the first Polish church in Calgary. A memorial fund was set up in Walter's honour by the Glenbow to promote multicultural exhibits. For further information see Barbara Kwasny's article, "Walter and Annie Chuchla", in Heritage, vol. 7, no. 5 (Sept/Oct 1979), p. 7-9. Claire began an oral history project in 1999 by interviewing Polish immigrants who came to Canada after the Second World War.

The material is in English and Polish.

Other papers of Walter Chuchla are held by Library and Archives Canada. Recorded interviews with Walter are in the Larry Ewashen Oral History Project (RCT-565-8), and the Century Calgary fonds (RCT-144-65), at Glenbow.

1991 material was added to earlier accessions and not accessioned separately.