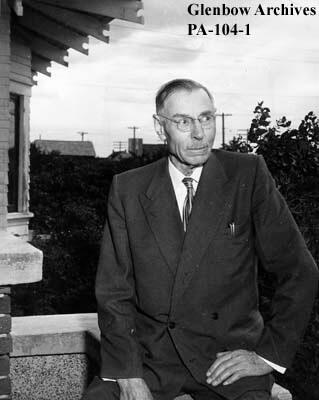 Charles Sherwood Noble, 1873-1957, was born in Iowa, USA and homesteaded in North Dakota. He came to Alberta in 1903 and married Margaret Fraser, 1872-1955, a school teacher. They had three children, Shirley F., 1906-1994, Alleen (Reich) and Gerald C. In 1908 Charles bought land northwest of Lethbridge, where the village of Nobleford was subsequently established.

In 1913 the Noble Foundation was incorporated to operate his holdings, which quickly grew to 10,000 acres (4000 hectares). The Foundation took over the 20,000 acre (8000 hectare) Cameron Ranch in 1918 but due to dry weather and a disastrous drop in wheat prices the Noble estate, worth $2.5 million, was foreclosed in 1922. Charles again acquired land and in 1930 Noble Farms, operated jointly with his sons Shirley and Gerald, was incorporated.

Charles was always concerned with the problems of dry land farming, and is best known for inventing the Nobel Blade, a cultivator which cuts off roots below ground, leaving the soil-holding "trash" intact on the surface. He built, tested and began producing the cultivators in the farm shop in 1936. Noble Farms Ltd. became Noble Cultivators Ltd. in 1940, and a manufacturing shop was set up in Nobleford. Noble Cultivators was bought out by Versatile in the early 1980s. Charles was inducted into the Alberta Agriculture Hall of Fame in 1951. In 2002 the Historic Sites and Monuments Board of Canada designated Noble as a National Historic Person.

Another interview with Shirley Noble is held by the Provincial Archives of Alberta.

The outline for RCT 432 is missing (if there ever was one).