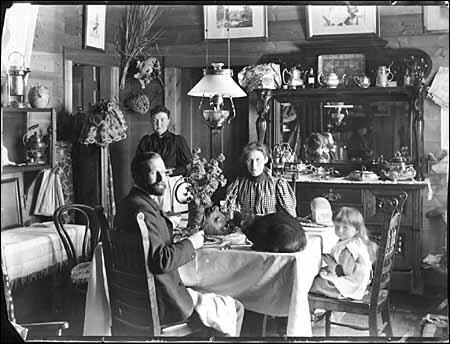 Charles Selby Haultain, 1862-1903, was born in Ontario, the son of Isabella and Francis Mitchell Haultain. He studied medicine in Toronto, but took a break during his third year to serve as a medical officer in the 1885 Riel Rebellion (North West Rebellion). He then completed his medical courses in Toronto, and subsequently obtained his LRCP in England. He set up practice as a physician in Winnipeg, Manitoba. He spent the summer of 1888 as a doctor at the North-West Mounted Police post at Wood Mountain, Saskatchewan, and when offered a commission in the NWMP as assistant surgeon in 1890, he accepted.

In 1904 Etta and the children returned to Port Hope, Ontario, where Etta spent the rest of her life. Charles' brother, Theodore Arnold Haultain, was a well-known essayist, who fought in the South African War. For further information, Etta's memoirs were published as With the Mounties in the Boot & Saddle Days : An Original Account of Life in the early West / Henrietta Dennistoun Haultain; foreword by Alexander Cameron Macdonnell; edited by Gord Tolton; afterword by Doran Degenstein. -- Fort Macleod : Riders of the Plains Commemorative Troop Association, 2006.

The negatives are extremely fragile, and are not available for public use.

Other records related to the Charles and Etta Haultain family are held by the Ontario Archives.