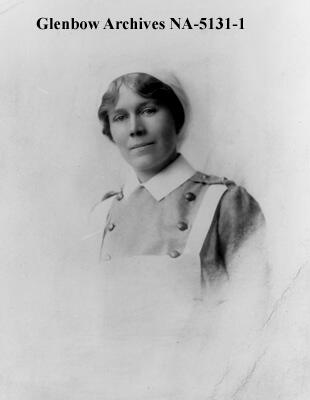 Catherine de Bellefeuille, 1884-?, was born in St. Eustache, Quebec. In September 1914 she was appointed to commissioned rank in the Canadian Army Medical Corps, and in October was sent to England as a nurse at the No. 1 Canadian General Hospital. She went to France in November and served with the No. 2 Canadian Stationary Hospital at Touget-Paris-Plage. In May 1916 she was posted to the No. 4 Canadian General Hospital in Salonika, Macedonia where she served for six months treating French, Serbian and British soldiers at the front.

She returned to England in December 1916 and served at the No. 14 Canadian General Hospital in Eastbourne, Sussex for the remainder of First World War. In June 1918 she was decorated with the Royal Red Cross for exceptional bravery and devotion to duty. She was also one of only 160 Canadians to receive the 1914 star for service in France before November 14, 1914. She returned to Canada in April 1919 and retired to Montreal in that year. Catherine's sister Marguerite married Mounted Police officer, Albert Edward Cortlandt Macdonell, in 1899.

The fonds consists of Catherine's First World War diary, scrapbook of newsclippings and photographs of the de Bellefeuille and Macdonell families

Her medals and nursing uniform are in Military History.

The microfilm, done in 1994, has no accession number.