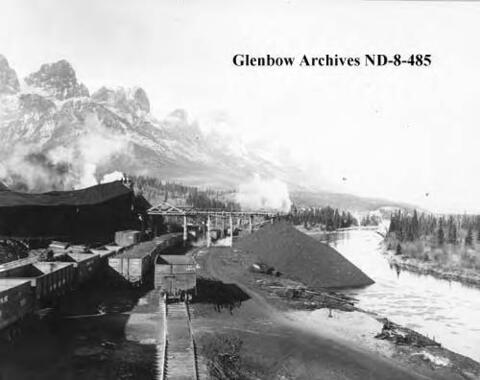 Canmore Mines Limited was incorporated under the name Canadian Anthracite Coal Company (Limited) in 1886. The letters patent were applied for by William Bain Scarth of Winnipeg, John Stewart of Fort Macleod, Archibald and McLeod Stewart of Ottawa, and a number of American investors. The Wisconsin-based company leased coal holdings from the Department of the Interior along the Canadian Pacific Railway (CPR) tracks near Banff, Alberta. It began operations near the town of Anthracite in 1887, but the mine was closed in 1888. The company then opened the No. 1 Mine at Canmore in 1890. From 1891 to 1911 The H.W. McNeill Co. leased the company's operations which included mines south of Canmore and the Anthracite mine, although the latter was again closed in 1904 because of prohibitive extraction costs. In 1911 the Canadian Anthracite Coal Company's leases were taken over by its operating subsidiary, Canmore Coal Co., which had its head office in Canmore. The No. 2 Mine at Canmore opened in 1918, replacing the No. 1 and running until 1963. In 1930 the company bought leases for a mine east of its operations belonging to Georgetown Collieries. By about 1936 the company's head office was in Charlottetown, Prince Edward Island. In 1938 the company and its subsidiary, Canmore Coal Co., were consolidated, the subsidiary dissolved, and the parent company's name changed to Canmore Mines Limited. The No. 3 Mine opened in 1948 and operated until 1968. In 1968 Canmore Mines Ltd. underwent a modernization program and was sold to Dillingham Corporation of Hawaii which was then sold to Delta Catalytic Corporation ca. 1987.

The originals of the microfilmed records are held by the Canmore Museum and James Fitzgerald.

BB Canmore was microfilmed on location in Canmore by Glenbow staff in December 1993. It has no accession number.