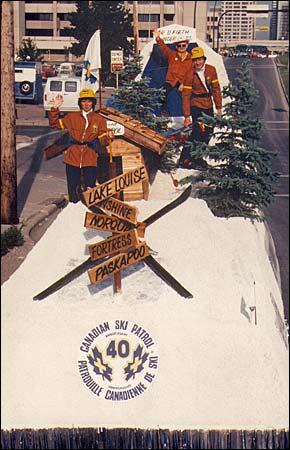 The Canadian Ski Patrol System, a volunteer first aid and rescue group which provides assistance to injured skiers, was formed by Dr. Douglas Firth in 1940 at the request of the Canadian Amateur Ski Association. It was registered as a national charity in 1962 and its head office is in Toronto. Ski patrols in the Calgary, Alberta area were active in the early 1950s and were originally part of the Western Division of CSPS. In 1955 they became part of the Mountain Division. In 1962 the Banff Zone of the Mountain Division was established. The Calgary Zone, which superceded the Banff Zone, was incorporated under the provincial Societies Act on February 1, 1979. Its objects are to reduce the incidence of ski accidents; provide remedial and first-aid in the event of ski accidents; encourage standardization of training, equipment and qualifications of ski patrollers; and to provide voluntary ski patrols in Calgary and the mountain areas frequented by Calgary skiers. In 1986 the Calgary Zone was one of eleven zones in the Mountain Division of CSPS. It is also a member of the Calgary Area Outdoor Council. For further information see "May I help you": The first 50 years of the Canadian Ski Patrol System / John & Carole Laffoon. -- Ottawa : The System, 1994.