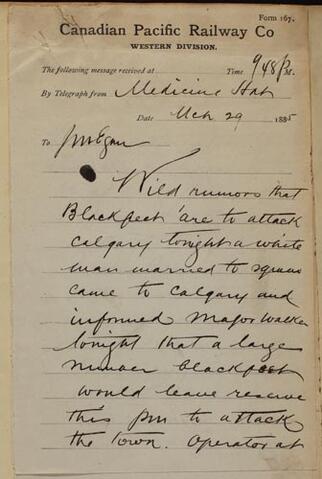 When the second Riel Rebellion broke out in March of 1885, William Van Horne, General Manager of the Canadian Pacific Railway, immediately offered the Canadian government the services of the railway to move troops, animals, equipment and provisions to the North-West Territories. From March 28 to April 12 the CPR moved 3324 men to Qu'Appelle, in a journey that took less than ten days, remarkable since parts of the railway line north of Lake Superior were still unfinished. John M. Egan, General Superintendent of the CPR, Western Division in Winnipeg, coordinated the western efforts. The CPR's telegraph services also provided essential communication regarding troop movements, Metis rebels, Indians, settlers, weather, and battles in the North-West.

The fonds consists of telegrams received at the CPR's Winnipeg office, predominantly by J.M. Egan, related to the Riel Rebellion. Includes a copy of Crowfoot's declaration of loyalty to the Queen.

The originals are restricted due to fragile condition. Transcripts are available for research purposes.

The Canadian Pacific Corporate Archives holds telegrams received by the CPR Montreal Headquarters during the 1885 Riel Rebellion. Photocopies are available at Glenbow (M-4875).

M-4875 are the photocopies of CPR Archives material.