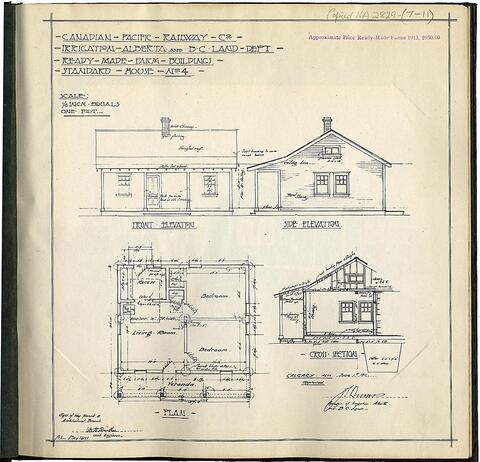 During the Canadian Pacific Railway's construction of the national railway in the 1880s, it became involved in the sale and settlement of land. Part of the provisions made by the government to the company were 25 million acres (10 million ha) of land in a belt along the railway. Land grants were administered by the company's Land Department in Winnipeg until 1912 when the responsibility was transferred to the Department of Natural Resources.

DNR had three divisions: Irrigation Projects, Lands, and Mines, and was administered by an Advisory Committee and an Executive Branch. Peter L. Naismith was the manager of the DNR from 1912 to 1927, and Samuel Graham Porter from 1927 to 1942. Settlement was closely linked to the construction of large irrigation works, which were increasingly centred in Alberta, therefore the headquarters of the department was moved to Calgary. In 1903 CPR was granted land in southern Alberta, called the Irrigation Block (divided into the Eastern, Western, and Lethbridge Sections) upon which to develop irrigation systems.

The material is predominantly in English, but some of the correspondence with immigration organizations and settlers is in other languages.

Other CPR records are held by the Canadian Pacific Ltd. Archives, Montreal.

Title based on contents and provenance of records.

M 9146, from EnCana, consists of 7 m of records which are not included in any previous finding aid.

There is another 2 reel film called "Petroleum" which is missing and has not been described.