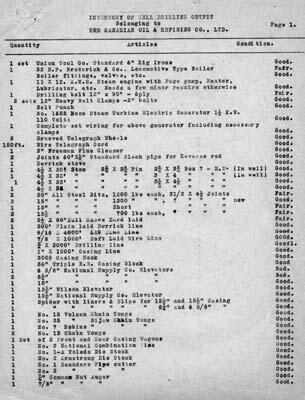 The Canadian Oil and Refinery Company was incorporated in Alberta in 1922 to acquire and develop petroleum leases and operate a refinery. The company's head office and refinery were in Lethbridge. It held leases east of Coutts, along the international boundary, and drilled one well ca. 1922. The well never produced, and the company was struck off in 1931.

These records were salvaged from the Hollinsworth Building, owned by Canadian Imperial Bank of Commerce, before the Bankers Hall renovations were begun. The company, or its representatives probably had offices in the building.