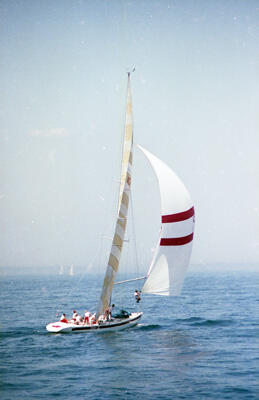 In the early 1980s, Calgary, Alberta lawyer Marvin McDill, 1928-1988, and his associates decided to sponsor an entry in the America's Cup yacht race, a competition that Canada had not contested for over a century. Among the directors were Jules Poscente, Basil Rodomar, James R. Richardson, Donald Cooke, Paul Lamontagne, J. E. "Ted" Grisdale, 1932-2012, Verne Lyons, Robert Fleming, and John Morgan. They raised funds and hired designer Bruce Kirby to create Canada I, which was built by Data Ship Systems Inc. Terry McLaughlin of Toronto was the skipper. Canada did quite well in the competition but ultimately was not successful. For further information see Trials : Canada 1 and the 1983 America's Cup / Jeff Boyd and Douglas Hunter. -- Toronto : Macmillan of Canada, 1984. The Canadian Yachting Association later named their Rookie of the Year Award the Marvin McDill Memorial award. Canada I was re-fitted as Canada II and entered several competitions in the later 1980s.

The fonds was held in the law office of Parlee McLaws until 2001 when it was turned over to Challenge director Ted Grisdale, who donated it to Glenbow.

The fonds consists of correspondence, photographs, videotapes, etc. regarding the organization, funding and operation of the Canadian entry in the 1983 America's Cup and subsequent yachting competitions.