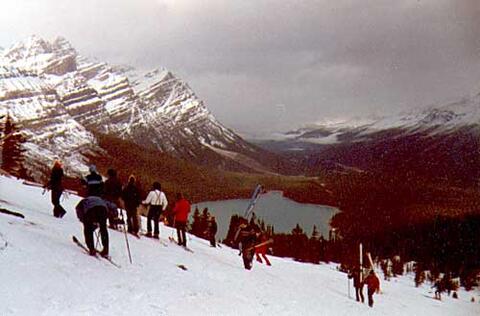 The Calgary Ski Club was formed in Calgary, Alberta in the early 1930s with John D. Southam, Allan Carscallen, 1907-1995, Charlie Michener, Dudley Batchelor, Jack Farish and Gordon Moody as founding members. It was incorporated in 1935 with Southam as president. The club's early programs were restricted to alpine skiing which mainly took place in the Mount Norquay and Mount Assiniboine areas. Ski buses and trains to Banff were arranged, and races and ski lessons promoted. A social program including an annual dance was also instituted. The club affiliated with the Canadian Amateur Ski Association in its early years. Competitive skiing became a facet of the club's programs such as co-sponsoring the first Dominion Championships in 1937 and 1940, and the Canadian Ski Championships in 1948. Membership expanded greatly after the Second World War.

Throughout the 1950s and 1960s programs included Saturday day trips to Norquay and elsewhere. By the early 1970s membership had seriously dwindled. To increase membership the club developed an extensive social program to recruit young single adults, and added cross country skiing, hiking and canoeing programs. However by 1976 the club was in danger of being a social club only, therefore sports and skiing programs were reemphasized and membership limited to 1000 members. By the early 1980s sporting and skiing activities were well attended. The club is a member of the Calgary Area Outdoor Council.

See also the Jack Farish fonds held by the Glenbow.

M 5766 should be amalgamated with the others.