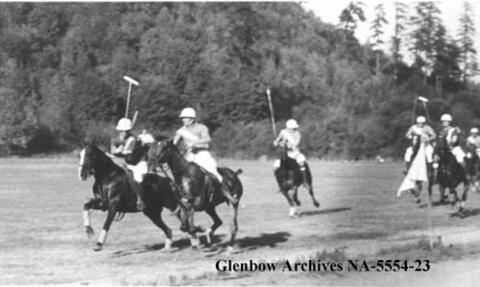 The Calgary Polo Club was established in 1890 and used a playing field in east Calgary. In 1892 it moved to Hillhurst, and in 1912 found a new site in south Calgary which it used until 1960 when it moved to a new home four miles southwest of De Winton, Alberta. The club was active in the 1920s and 1930s but play was heavily curtailed during the second world war. After 1945 the club gradually revived. In the 1980s the Mannix family of Calgary were club supporters. For further information see 100 Years, Calgary Polo Club, 1890-1990. -- Calgary : SG Classic Communications & Publishing Ltd., 1990; and Calgary Polo Club 2000 : Celebrating our 110th anniversary / Calgary : Thomas Morgan Communications, 2000.

The fonds consists of photographs of polo teams, ranchers, the Mannix family and Mannix construction work.