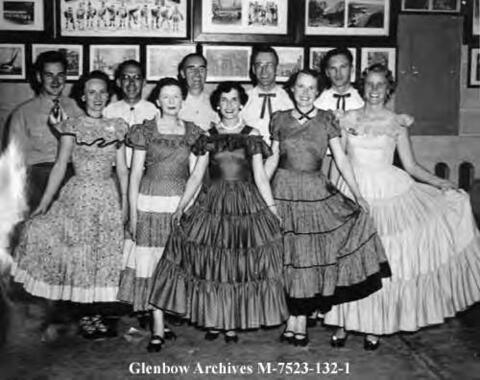 Calgary and District Square and Round Dancers Association fonds

Calgary and District Square and Round Dancers Association

Between 1949 and 1951 many square dance clubs were formed in Calgary, Alberta. The Canadian Square Dance Association was created in Calgary in 1950 to provide leadership, guidelines and coordination to the various groups. Collier Maberley, 1900-1976, was the first president. In 1954 the Calgary and District Square Dance Association was formed as a regional arm to CSDA, and in 1957 was registered under the Societies Act. Its aims are to promote fellowship through square dancing and to coordinate the activities of affiliated clubs. In 1975 the name was changed to the Calgary and District Square and Round Dancers Association. Affiliated clubs included Merry Go Rounders, Queens and Jacks, the Gadabouts, Donkey Dancers, Richmond Revellers, Single Eights, Western Whirlers, Dots and Dashers, Roses 'n Thorns, and Smiling Promenaders.

A large collection of square dancing artifacts, the "Memory Lane" collection, is held by the Cultural History department at Glenbow.