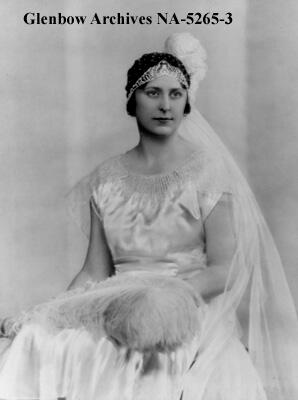 William Beamish Burnett, 1852-ca. 1927, was born in Kingston, Ontario. He joined the First Frontenac Volunteer Cavalry (later the Fourth Hussars) and attended the cavalry school in Toronto in 1868. He then attended infantry school in Kingston, and stayed with the cavalry as a corporal. He received a number of promotions and retired as a major in 1896. Also during this period he was a switchman, yardmaster and conductor for the Grand Trunk and Canadian Pacific Railways. In 1896 he became yardmaster for the Alberta Railway and Irrigation Co. railway in Lethbridge, a position he held until 1904 when he became customs cashier. He was an active member in the Independent Order of Oddfellows for fifty years, serving in many executive positions in the organization. He married Agnes McNabb from Scotland and they had three children who survived infancy, Thomas, William and Edith.

Edith married Frederick Hammond, an entrepreneur who invested in the coal industry of Alberta. They had five daughters, Gertrude Agnes "Agness", 1912- , Priscilla, Gwendolyn, Lois Fredericka, and Edith Hilda "Tilda". The sisters were all presented to the Royal Family during the traditional debutante season in London. Agness was notable as one of the first women to run and operate a cattle ranch in Alberta. Lois married Justice Harold W. Riley Jr. Thomas was educated in Ontario and enlisted in the 192nd Battalion in First World War. After the war he was a merchant in Hillcrest and Bellevue, Alberta, and also lived in Cadomin, Alberta.

The fonds consists of personal, military and IOOF papers of William B.; Thomas' photographs of the Cadomin Mine, Alberta; newsclippings; and portraits of family members.

Information from the family scrapbook is included in the Extra Print Information file for NA-5265.