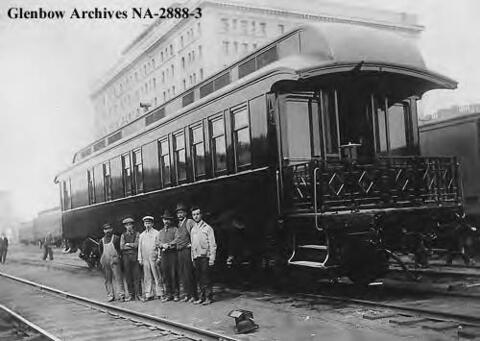 In 1883 brakemen and switchmen employed by the Delaware and Hudson Railroad in New York State organized an association to provide sickness and disability insurance, and later organized the Oneonta Lodge of the Brotherhood of Railroad Brakemen. Due to overwhelming interest expressed by trainmen and switchmen in the USA and Canada, it was decided to form an international organization, the Grand Lodge of the Brotherhood of Railroad Brakemen. The first Canadian local was formed in Moncton, New Brunswick in 1885. The union's name was changed to The Brotherhood of Railroad Trainmen in 1890 as diverse railroad workers joined. Its functions were represented by the various departments, Protective (or Grievance), Legislative, Insurance, and Tuberculosis. Authority to organize Alberta Lodge No. 663 was granted in 1903 with Thomas W. Clarke as master. Meetings were held at the Cooperative Hall in Calgary. The local's bylaws were approved in 1910 by the Grand Lodge. In 1957 the BRT affiliated with the American Federation of Labor-Congress of Industrial Organizations and the Canadian Labour Congress. In 1969 the BRT merged with the Brotherhood of Locomotive Firemen and Enginemen and the Order of Railroad Conductors to form the United Transportation Union.

Gift of Brotherhood of Railroad Trainmen, Alberta Lodge No. 663, 1967.

Records of the United Transportation Union are also held by Glenbow.