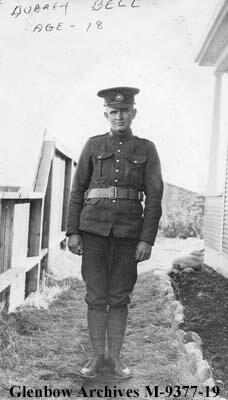 Thomas Bell and his wife Emma Bell (née Ray), from Belleview, Manitoba, settled at Millerfield, an isolated district north of the Red Deer River near Dorothy, Alberta, in 1910. They had six children, Raymond C., Aubrey T., Marjorie, Leslie, Mildred, and Marion. Raymond and Aubrey served in France during the First World War; Aubrey was missing in action in 1917 and was eventually declared dead. In 1919 Thomas and Emma retired to Victoria, B.C., and Raymond took over the family farm. He married Mary Lawson of Dorothy, and they had four children. They moved to a ranch in the Wintering Hills. In 1942 they moved to a grain farm near Carstairs, Alberta, and eventually retired to Victoria. Leslie became a geologist. Marjorie, Mildred, and Marion all married and eventually all settled on Vancouver Island.

The fonds consists of correspondence from Aubrey Bell and Raymond Bell to family members during the First World War; correspondence from other relatives and family friends; correspondence concerning Aubrey’s disappearance in action; wartime souvenirs, photographs, and newsclippings; Marion’s history of Millerfield, written as an elementary school project; and Raymond’s photographs of the Wintering Hills ranch, the Hand Hills Stampede, and the Calgary Stampede.