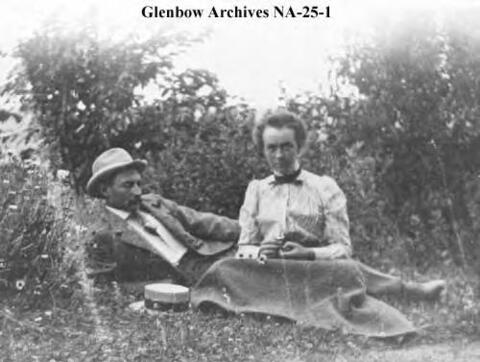 Christian "Chris" Bartsch, 1869-1959, was born in Chur, Switzerland and emigrated to Wisconsin, USA in 1888. In 1897 he made the first of seven trips ferrying cattle to the Klondike. Grace Graham Bartsch, 1871-1959, was born in Chicago, Illinois and taught school in Oregon. In 1899 the two were married and she made three trips to Dawson City, Yukon with her husband. In 1903 they settled in Calgary where Chris worked as a buyer and manager for Pacific Cold Storage. In 1910 they moved to Gleichen, Alberta where Chris managed the PCS ranch. He later opened a butchering business and ranched at Hussar. In 1928 they moved to Peace River where they operated the Gundy Ranch. They retired to Calgary in 1937. They had three children, Lewis, Alice and Ted.

Purchased from and gift of Mr. and Mrs. C. Bartsch, and gifts of Ted Bartsch and Dorthea Calverley, 1956-1976.

An interview with C. Bartsch is in the Drybelt Pioneers Oral History Project at Glenbow (M-4074).