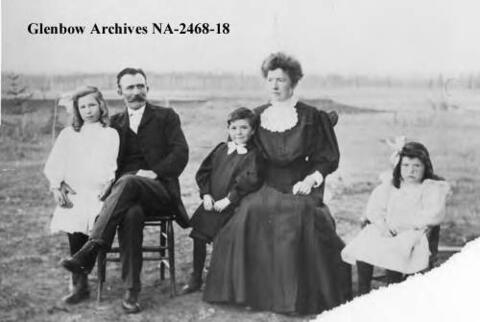 George Brown Barclay, 1863-1940, an iron molder by trade, and a frustrated inventor, brought his family from Illinois, USA to Alberta in 1905 to homestead. They settled in the district of Meadowbrook, near Gull Lake, but having little success at farming moved to Calgary in 1913. George Barclay worked as a well-driller and Elsie Ellen Barclay, ?-1932, as a seamstress to support the family. Their two daughters, Mary Belle Barclay, 1901-2000, and Elsie Catherine Barclay, 1902-1985, became school teachers. They taught in Calgary and various rural schools throughout their long careers. Catherine taught French and was known for her work in the French section of the Banff School of Fine Arts. She was also very involved in drama and theatre in her early years. Mary made natural science one of her teaching specialties. The sisters co-founded the Canadian Youth Hostels Association in 1933, and set up the first official North American youth hostel at Bragg Creek. Mary received the Order of Canada. Their brother, George Franklin Barclay, 1903-?, was an accountant. He worked for the Department of National Revenue from 1930 until his retirement in 1968. For a more detailed family history see Mary Belle Barclay : Founder of Canadian Hostelling / Evelyn Edgeller. - Calgary : Detselig Enterprises, 1988.

An interview with Mary is in the Junior League Women's Oral History Project at Glenbow (RCT-476).