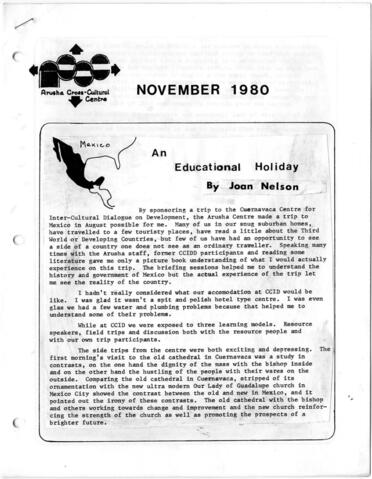 The Arusha Cross-Cultural Centre was established in 1972 to provide development education for the Calgary area. Initially called the Calgary Development Centre, the organization began operations at Mount Royal College. The name was changed to Arusha in 1973. The Centre worked closely with related organizations in the city and published a monthly newsletter regarding the workshops, film series, tours and other events sponsored by the centre.

Among projects developed were a teachers' guide to resources in development issues, a weekly two hour radio program, Sunday International on CJSW FM 91 and a life skills program for immigrant women called Making Changes. Funding is obtained through the centre's own fund raising projects, revenues from memberships, course registrations, donations and resource sales, and the Canadian International Development Agency. Arusha is a member of the Development Education Co-ordinating Council of Alberta.