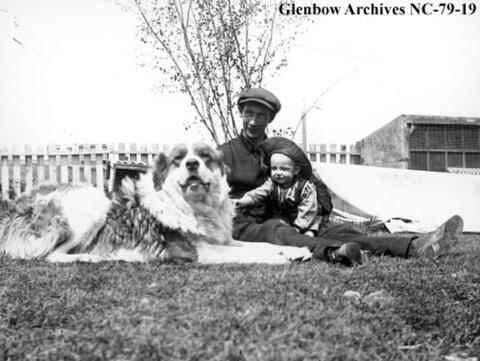 Arthur J. Turner, 1885-1974, was born in Scotland. He came to Canada in 1905. In 1908 he worked on the Northern Ontario Railway, then moved to Calgary, Alberta later that year, where he boarded with the Griffith Parry family. Arthur and the Parry family subsequently homesteaded in the Munson / Morrin area. In 1915 he married Florence Carrington, 1898-1978, and they had four children, Audrey (Gibson), Roy R. Turner, Arthur John “Bud” Turner, 1921-2004, and David Arthur Turner (who died as a child). During the First World War Arthur served overseas with the Canadian Mounted Rifles, Lord Strathcona Horse, and 50th Battalion. After the war the Turners settled in Calgary and Arthur worked as a carpenter in his own building contracting business. He was a Social Credit supporter and a Mason. Florence was active in the North Hill United Church and volunteer community work. Arthur's brother, Fred Turner, came to Canada in 1912. He died in 1916 while fighting in the First World War.

The fonds consists of Arthur's notebooks and diaries (1900-1919), correspondence, war papers, memberships and memoirs of his homesteading and war experiences; Florence's certificates and papers re United church activities; newspaper clippings about the family; and photographs of homesteading, the Munson area, Calgary businesses, and the military. Includes photos of the Griffith Parry and Thomas Pierce families of Morrin, and the Henry Barrett family of Beddington. Also includes some documents related to their brother-in-law Walter Smith (who was born in England in 1856 and died in Calgary in 1944).

PC-119 was given to Heritage Park, so has not been included here.