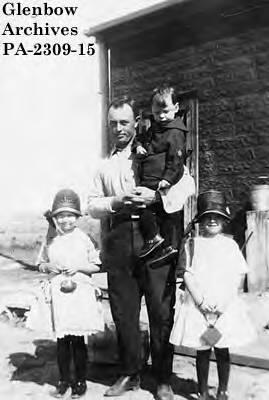 James Angus Anderson (known as Angus), 1897-1980, was born in Hamilton, Ontario, and moved with his parents to Fort William and then to Calgary in 1909. Angus had a farm with a partner, George Arthur Buckley, near Richdale, Alberta ca. 1918-1927 but declared bankruptcy in 1927. He married Edythe Caroline Towhey, 1900-1955, from Medicine Hat, in 1926 and they had at least three children. The couple moved to Calgary where Angus worked for the Canadian Pacific Railway (CPR) until his retirement in 1963. He belonged to the Brotherhood of Locomotive Firemen and Enginemen. Angus married Sarah Ann Melissa "Millie" Reid Martell in 1959. He was an accomplished amateur vocalist and an active member of the First Baptist Church.