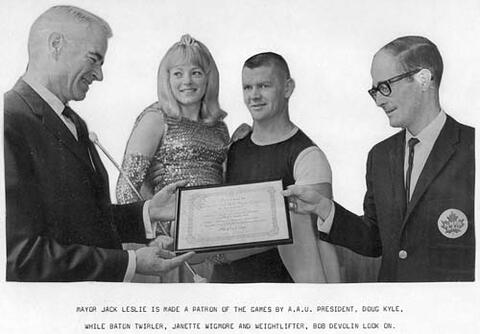 The Alberta Branch of the Amateur Athletic Union of Canada (AAUC) was Alberta’s earliest sports umbrella group. It was founded in Calgary in 1908, and by the 1920s represented over 1500 athletes and 31 different sports groups. It served an important role in organizing, promoting, and regulating amateur sports activities in the province, and organized the first Alberta Winter Games in 1968. The sports represented included boxing, track and field, wrestling, weightlifting, gymnastics, fencing, handball, and baton twirling. As the years passed many sport organizations matured and developed national and provincial organizations, and as they did so they withdrew from the AAUC. The association remained active in the promotion and regulation of amateur sports in the province until 1971, when the group voted at its annual general meeting to disband in favour of Sport Alberta. Bob and Betty Lucas were closely associated with the AAUC for many years, and served on the executive from 1961 to 1971. For further information see Useful Pleasures : The Shaping of Leisure in Alberta, 1896-1945 / Don Wetherell and Irene Kmet.-- Edmonton : Alberta Culture and Multiculturism; Regina : Canadian Plains Research Center, 1990, p. 137-139; and H. Ballantyne's article, "Beginnings of the Amateur Athletic Union" in Alberta History. -- vol. 52, no.3 (Summer, 2004), p. 26.

The records of the national AAUC are held by Library and Archives Canada. The Sport Alberta fonds is also held by Glenbow.