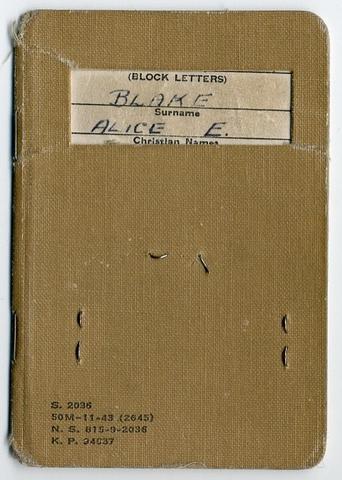 Alice Evelyn Blake, from Calgary, volunteered to serve in the Women's Royal Canadian Naval Service in World War II. A postcard of the Royal Canadian Naval College in British Columbia indicates she likely received some training there. When she was called to active service on September 23, 1944, she was stationed in Regina, Saskatchewan. She was sent on draft to Galt, Ontario to receive training as a Probationary Sick Berth Attendant. Luggage tags included in the collection indicate that she was initially stationed at HMCS Cornwallis and was later transferred to HMCS Stadacona in Halifax.

Fonds consists of correspondence relating to A.E. Blake’s active service in the Women's Royal Canadian Service and other materials gathered by A.E. Blake during her service. It is divided into 3 series

Titles for folders, unless bracketed, are taken from the original container.

This AtoM record was created by Jason Nisenson, July 2015.