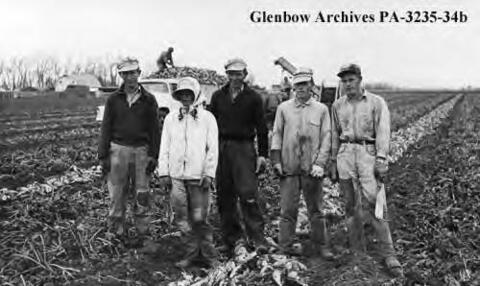 Alberta Cooperative Sugar Beet Growers was established in Lethbridge, Alberta in 1925, the same year in which the Canadian Sugar Factories Ltd. factory was built in Raymond. The first president was Arthur Dahl. The name was changed to the Alberta Sugar Beet Growers' Association in 1941 and to Alberta Sugar Beet Growers' Marketing Board in 1984. The association serves the sugar beet growing areas of southern Alberta, including Bow Island, Coaldale, Diamond City, Iron Springs, Lethbridge, Magrath, Picture Butte Raymond and Taber. Concerns of the association have included the lack of workers for this labour-intensive industry, poor relations with the sugar refineries, and the lack of a national sugar policy. During the Second World War large numbers of interned Japanese and German prisoners of war were used as labour, and in more recent years First Nations peoples from Western Canada have been employed. ASBG has had close links with the Canadian Sugar Beet Producers' Association, the presidency of the latter being rotated among the provincial organizations. By the 2000s ASBG was the sole remaining member of the CSBPA.

The records of the Ontario Sugar Beet Growers' Association and the early Canadian Sugar Beet Producers' Association probably came to the Lethbridge office during the time Lalovee Jensen, who was prominent in ASBG, was president of CSBPA.