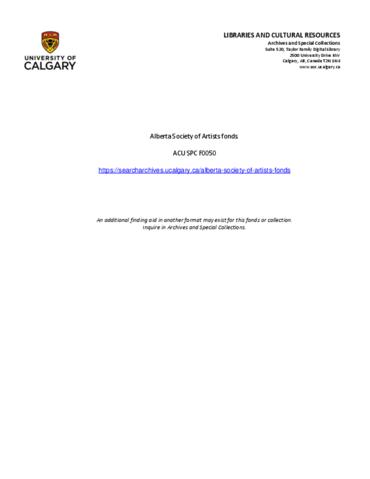 The Alberta Society of Artists was founded by a group of Calgary artists led by Alfred C. Leighton and incorporated in 1931. Objectives of the Society are to foster and promote the fine arts in Alberta. A.C. Leighton, the first president, was succeeded by a number of prominent Alberta artists including H.G. Glyde, Illingworth Kerr, Stan Perrot and Ken Sturdy. The Society published several issues of a newsletter Artometer in the 1930s, followed by Highlights, which began publication in the late 1940s. Highlights flourished under the editorship of Jim Nicoll, when it included original works of art and was published in limited editions of 100 issues, the average size of the membership at that time. Additional information in Alberta Society of Artists : the first seventy years / by Kathy Zimon (Calgary : University of Calgary Press, 2000).

Donated by the Calgary Allied Arts Foundation in 1990.

Incomplete run of A.S.A. newsletter Highlights (1948-1980) available in Special Collections. The A.S.A. index : an index to Highlights and the bulletins and newsletters of the Alberta Society of Artists, 1948-1980 / compiled by Jan Roseneder. - Calgary : University of Calgary Libraries, 1982, also available at the repository.