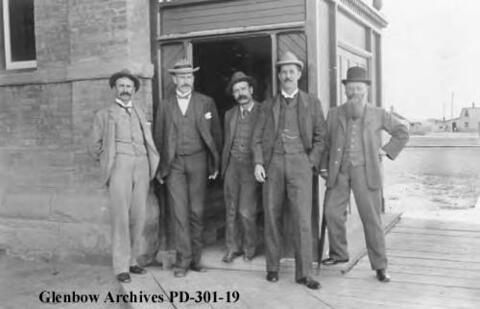 The North Western Coal and Navigation Company (NWCNC) was incorporated in 1882 in Great Britain. Sir A.T. Galt was president. In 1883 NWCNC applied to build a railway from the Canadian Pacific Railway (CPR) line at Medicine Hat to the company coal mines at Belly River. The Alberta Railway and Coal Company (ARCC) was formed to raise the capital, by selling land granted to it by the government. In 1890 NWCNC amalgamated with ARCC under the latter name. In 1891 the Alberta Railway and Coal Company brought in Mormon settlers to farm the land it proposed to irrigate. The company later constructed a canal to divert water from St. Mary River. The Alberta Irrigation Company, which had received its charter in 1893, and was run by E.T. Galt, manager of ARCC, was in charge of the canal project at St. Mary River. In 1899 ARCC changed its name to the Canadian North West Irrigation Company, and around the same time, Elliott T. Galt formed the St. Mary's Railway Company (SMRC). In 1904 SMRC and CNWIC amalgamated to form the Alberta Railway and Irrigation Company, and in 1912 the CPR took over ARIC's operations. Peter L. Naismith was the manager of the company from 1900 to 1912.

The fonds consists of correspondence regarding patents and land grants; orders-in-council and schedules; agreements between the CPR and the province of Alberta pertaining to irrigation; North Western Coal and Navigation land sales register; water agreements of the Canadian North West Irrigation Company and the Alberta Railway and Irrigation Company; maps of irrigation projects; telegrams and express ledger of Alberta Railway and Coal Company station at Raymond; coal mine employee register (1908-1924); photograph album accompanying report by Jeremiah L. Head (1898); verbatim report of a hearing into a complaint by Cardston farmers and business interests concerning rates (1909); plan of the right-of-way of Western Dominion Railway from Waterton River to the USA border (1915); and a historical sketch of the company. Includes a microfilm of an ARIC scrapbook.

The location of the original scrapbook is unknown.