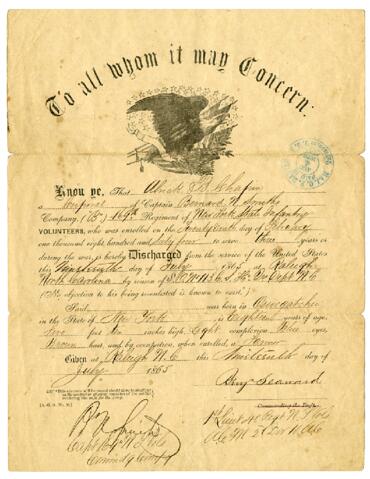 Alaric B. Chapin, 1847-1924, was born in Oswegatchie, New York, USA. During the American Civil War he enlisted in the Union Army. During an attack on a Confederate fort in 1865, he voluntarily placed himself in an exposed position in order to cut holes in an enemy palisade. He was finally awarded the Congressional Medal of Honor for this action in 1914. Following the war, he moved to Wisconsin, then to Minnesota. He married Mary Smith and had three sons and two daughters. One of the sons, O.S. Chapin, operated the Chapin Company, an automobile and tractor dealership in Calgary, Alberta. He died in Portland, Oregon. For further information see Randy Fletcher's article "Storming the ramparts : Oregonians display courage in the Civil War", Oregon Magazine, January 2009, available onine at http://oregonmag.com.

Fonds was donated to the Riveredge Foundation by A. B. Chapin's granddaughter, Miriam J. Adams (Mrs. W. P.), of Banff, Alberta, 1976.

No finding aid, but the papers have been digitized.

A.B. Chapin's medal, musket, and bayonet are in the Glenbow Military History collection.