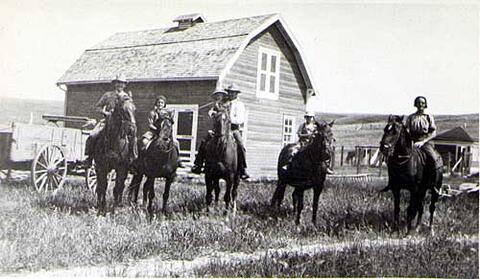 Alfred Ernest Cross, 1861-1932, was born in Montreal and came to Alberta in 1884. The following year he started the A7 Ranche west of Nanton, Alberta. He founded the Calgary Brewing and Malting Company in 1892, and was president until his death. He served on the North-West Assembly from 1899 to1902. He was a founding member of the Western Stock Growers' Association, Calgary Board of Trade and the Ranchmen's Club (for which he served as president, 1906-1908 and 1911-1912), and was one of the "Big Four" who founded the Calgary Stampede.

Helen was very active in the Calgary Diocese Women's Auxiliary (Anglican church) and the Calgary General Hospital Ladies Aid. J.B. Cross succeeded his father as president of the Calgary Brewing and Malting Company in 1932, and also managed the A7 Ranche from 1932 to 1945. Sandy Cross was a well-known breeder of Galloway and Shorthorn cattle on Rothney Farm, south of Calgary.

M-8780, Box 9 contains mould and has been sent to conservation for remediation. Access to this box is not available, please consult with archivist for more information.

PA-3709 is also included in the Oliver B. Buell fonds